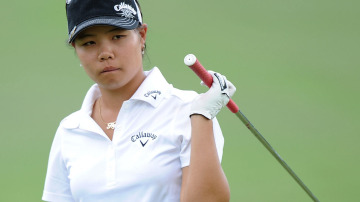 Sue Kim has won a professional golf tournament. This time, she gets to keep the money.  The 20-year-old from Langley, B.C., breezed to a six-shot win Thursday at a SunCoast Ladies Series event in Lake Mary, Fla. She shot the lowest score of the final round – a one-under-par 71 – to reach five-over 221 and post a comfortable victory over runner-up Cristina Corpus of the United States.

The former amateur star broke into the winner’s circle in 2008, at 17, with consecutive victories on the CN Canadian Women’s Tour. As an amateur, she wasn’t allowed to keep the first-prize money.  A pro since 2010, she can pocket the modest $1,300 (all currency U.S.) earned Thursday at Magnolia Plantation Golf Club.

She wasn’t the only Canadian to win on the mini-tours this week. In Arizona, Hamilton-born Alena Sharp roared to victory at the Grasshopper Tour’s inaugural 2012 event Wednesday on familiar ground – in the Phoenix area, where she now lives, and at Seville Golf and Country Club, of which she’s a member.  Canada’s top-ranked female player shot five-under 67 in the final round to reach eight-under 208. She won by five strokes over Alejandra Llaneza of Mexico and earned $1,700.

It was her first competitive outing of the 2012 season. An LPGA Tour regular, she skipped its season opener in Australia to attend her sister Tara’s wedding in Ontario. She plans to make her 2012 debut on the big tour next month at its stop in Phoenix.  Sharp entered the final round Wednesday tied for the lead and pulled away on the front nine, going three under. “The final round was extremely fun for me,” Sharp said on her website, alenasharpgolf.com. “I love being in that position where you are anxious to get out there and see what the golf course gives you.”  She credited her success to keeping her foot on the accelerator. “I was proud of myself for staying aggressive and target-focused all day long. It truly pays off.”

Canada nearly had a third champion this week, too. Calgary amateur Nicole Zhang led a Cactus Tour event in Chandler, Ariz., going into the final round Wednesday. But she shot four-over 76 and slipped into a tie for third place, five strokes behind winner Joy Trotter of the United States.

Kim now leads the Florida mini-tour’s 2012 money list, through five events. She has two other top-10 finishes.  The results should give Kim momentum as she heads toward her regular gig on the LPGA Futures Tour. The developmental circuit, one rung below the LPGA Tour, begins its season in late March in Florida.  Maude-Aimée Leblanc of Sherbrooke placed fifth Thursday, finishing the 54-hole event at 17 over. Leblanc, a former teammate of Kim’s on Canada’s national amateur squad, holds an LPGA Tour card.